Shep’s simplicities and analogies always engage and educate me. Here, in the simplest of forms, we learn how pizza has changed through technology and how younger generations have impacted that. (I do have to wonder how the kids being born today are going to communicate…will they just think something and have it become a reality with no device necessary?). This of course made me ask myself (and you of course) how are we changing our businesses and our services to adapt? Would love your thoughts, so please read on.

Be as Easy as Ordering a Pizza 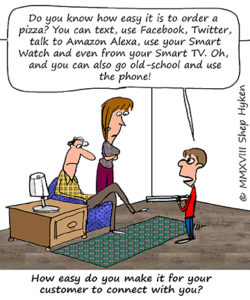 Technology has taken us to a new level of pizza ordering. Picking up a phone to order a pizza is an option, but it’s so old school. You can order online or use an app on your smartphone or tablet. Or, you can just use a voice command and order with Alexa or Google Home. And, once you order your pizza, you can track the order. You know when your pizza is being prepped when it comes out of the oven and when it’s on its way. Domino’s has made it easy – as in convenient.

In 2008 Domino’s was struggling and their brilliant leadership turned the company around. They recognized their pizza wasn’t as good as it could be, and publicly stated it needed improvement. So, they improved. They also revolutionized their process and started building technology into the customer experience. The Domino’s ANYWARE concept allows their customers to not only order the pizza with the toppings they desire but to connect with their neighborhood Domino’s by more than ten ways, with more to come. They include:

The point is that even a pizza company recognizes the necessity to reinvent its processes to keep up with the times. Beyond being a better pizza, they wanted to make it easier on their customers, and that’s what every company must do. Study what Domino’s has done. What are they doing that you can do in your business? What can you do to be more convenient for your customers?

Andrea Michaels is the founder and president of Extraordinary Events, and the author of Reflections of a Successful Wallflower: Lessons in Business; Lessons in Life. She may be reached via amichaels@extraordinaryevents.com.